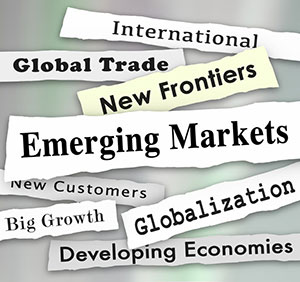 Most of the time, when people refer to international markets, they are talking about international developed markets like Europe, Asia, Japan, Australia, etc. Like the U.S. they are considered more advanced economically.

Emerging markets have more of “emerging” economies. They typically have lower-than-average per capita income and are experiencing rapid growth, development and social change. Typical emerging markets are the BRICs (Brazil, Russia, India and China) and PIIGS (Portugal, Ireland, Italy, Greece and Spain) but also include other countries like Hungary, Malaysia, Mexico, and South Africa.

Looking for an experienced and trustworthy financial advisor? Start with these characteristics:

We offer completely customized investing services to meet your needs. We use our ACTION plan to develop a low-cost, tax-efficient, globally diversified, factor-capturing Base Portfolio.  We then personalize it based on your goals and preferences resulting in a custom-tailored portfolio just for you.

Wondering how you’re going to fund your retirement and make it last?

You’re not alone. Many people approaching or already in retirement have similar concerns.

Using strategies from our Retirement Income Playbook, we can design a “game plan” to help you achieve your retirement goals. We’ll review your goals and concerns, analyze various scenarios and develop a comfortable, yet effective, retirement plan.

Learn more about our retirement strategies.